Six months have passed since plans for Australia Consensus were first announced. It has been intriguing and disturbing to see Australian media descriptions of me and my think tank, the Copenhagen Consensus Centre, that are ungrounded in reality.

Intriguing because, while Cop­enhagen Consensus has spent a decade working on development priorities, any Australian newspaper reader would be forgiven for believing our efforts are all in the trenches of global warming politics.

Disturbing because some in the Australian press seem to have difficulty distinguishing between journalism and campaigning, especially when they misinterpret data and make up quotes.

Copenhagen Consensus has existed for a decade. With more than 300 of the world’s top economists and seven Nobel laureates, we have conducted nine major research projects highlighting the costs and benefits of different investments on topics from HIV-AIDS in sub-Saharan Africa to Latin American development priorities. Only one project — Copenhagen Consensus on Climate in 2009 — dealt exclusively with climate change. Top climate economists and three Nobel laureates asked where a dollar spent could do the most good for climate, for example with reforestation, carbon taxes or technology transfers.

Of 339 research papers published since 2004, just 51 tackle the economics of climate change. (Symptomatic of the state of debate in Australia, I feel compelled to add that all accept the reality of man-made global warming).

For the past 18 months, Copenhagen Consensus has focused on the UN Global Goal agenda, showing its 169 development targets to vary hugely in societal benefits. A Nobel laureate panel found the UN should focus on 19 phenomenal targets including efforts to eradicate tuberculosis, improve girls’ schooling, increase family planning and phase out fossil fuel subsidies. 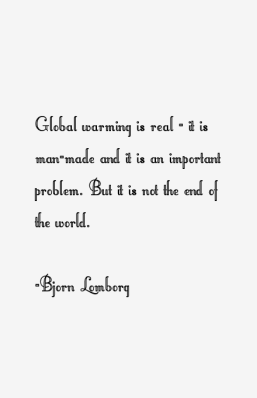 As president, my role includes connecting with policymakers, international organisations and the public to ensure this research shapes real-world decisions.

During the past year, my articles and interviews about Copenhagen Consensus research have been published more than 1000 times in 89 countries, from The Age,Washington Post, Times of India to The East African and Venezuela’s El Universal. Only a small portion focused on climate change; the vast majority talked about everything from malaria and domestic violence to air pollution and broadband access.

Yet in Australia my name is never published without “climate” by its side. Despite Australia Consensus plans focusing on development and prosperity, Australian reporters regularly have mislabelled it a “climate change think tank”.

Recently, two media outlets went further than getting basic details wrong. In August, the Guardian Australia announced that “Lomborg’s ‘consensus centre’ was to spend up to $800,000 of its $4 million in government funding on promotion and marketing”.

Yet the reporter hadn’t stopped to properly fact-check and call us. She had a draft budget in which the University of Western Australia casually labelled some spending “Dissemination, promotion and mar­keting”. This was a poor description because the entry covered academic publishing, book printing, multimedia production, websites for academic research, media monitoring, newsletters and mailing lists for research findings. Not the impression left by the Guardian Australia.

Of greater concern, the reporter wasn’t actually reading the budget that showed how we would spend government funding but a different budget, mostly consisting of $8m extra from private funding sources. So she mischaracterised the proposed use of the funds and overstated the public component by more than 100 per cent.

We emailed the Guardian Australia to discuss these errors. The journalist did not respond. Her “scoop” has been extensively quoted elsewhere, including in The Conversation.

Despite its tagline “Academic rigour, journalistic flair”, The Conversation has offered the most breathtaking example of Australian journalism. In a piece by Mon­ash University media studies lecturer David Holmes, the outlet published an incorrect quote. 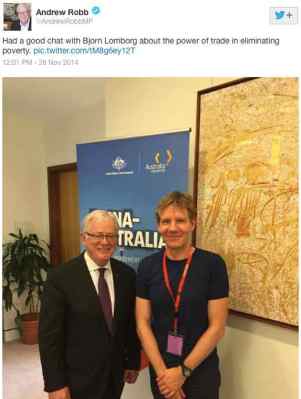 Despite our record, Holmes believes that Copenhagen Consensus is climate-focused and we use development as a stalking horse to “attack” climate policies.

He rests this assertion on the claim that in 2013, writing for The Australian, I forgot the name of my own think tank and described it as the “Copenhangen (sic) Consensus Centre for Climate”. In Holmes’s mind, the veil slipped: my quote revealed that our work is really climate-focused.

The word “Centre” was added to the quote in The Conversation. Given the article’s argument wouldn’t make sense without the fabrication, it is difficult to allow for a generous interpretation where this was just an error.

We have tried getting other factual errors acknowledged and fixed in the past. The Conversation told us these were a matter of “differing interpretations”. I beg to differ. Campaigning reporters have every right to advance their own perspective, even if I question whether this should be called journalism.

What is dispiriting is when they do not engage with our research or record. Or the facts. Copenhagen Consensus has helped ensure billions of dollars is spent on highly effective measures such as malnutrition.

In any topic, I don’t shy away from making unpopular arguments based on what cost-benefit analysis shows. Indeed, in the last months of this year, as global leaders prepare to strike a new climate treaty in Paris, Copenhagen Consensus will focus again on climate as we make the case for an effective treaty with more spent on research into green energy.

No doubt this will lead to further attacks and mischaracterisation of our work. I cannot help but think that this reflects more on the critics than it does on Copenhagen Consensus.

Bjorn Lomborg is president of the Copenhagen Consensus Centre. His new book is The Nobel Laureates’ Guide to the Smartest Targets for the World.