A Russian plane carrying 224 people has crashed in Egypt’s Sinai Peninsula, killing all on board. 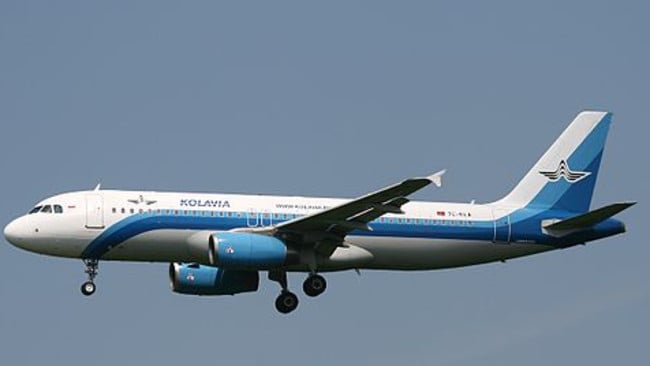 The Airbus A321 was operated by charter company Kolavia or Metrojet.

ISLAMIC State has allegedly published terrifying footage purporting to show the moment the doomed Russian airliner, which the terrorist group claims to have downed, crashed down to earth and left no survivors.

The chilling, unverified video was uploaded to social media, appearing to show a midair explosion of a large structure resembling an aircraft. The black figure plummets through the sky before being consumed by smoke.

News Corp Australia is seeking to verify its authenticity. The video was not circulated in the militant group’s usual manner and the footage appears to show the plane flying at a lower altitude than the 30,000 feet it was cruising at, at the time of the incident.

Investigators have rejected the claims made by IS terrorists as they work to establish the cause of the crash of the Airbus A321 in Egypt.

The Islamic State has released a video purporting to show the final moments of the Russian jet that crashed in Egypt, killing all 224 people on board.

All 224 passengers — including 17 children — died when the flight to St Petersburg crashed in a mountainous area of central Sinai just 23 minutes after departing the resort town of Sharm al-Sheikh.

Search and rescue officers have described a “tragic scene” after finding more than 100 bodies, including children, scattered at the crash site of a Russian plane in Egypt. 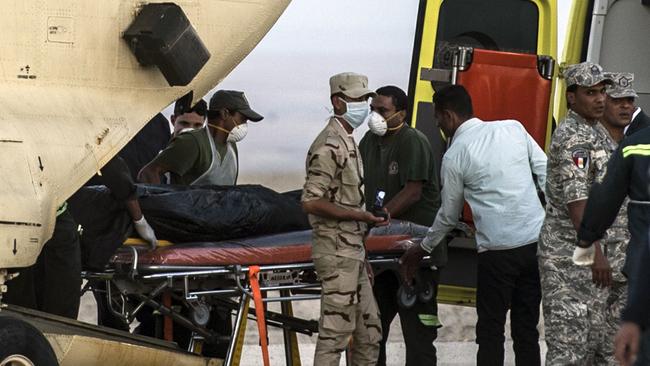 Grisly work … Egyptian paramedics load the corpses of victims of a Russian passenger plane crash in the Sinai Peninsula, into a military plane at Kabret military air base by the Suez Canal. Picture: Khaled Desouki/AFPSource:AFP

The plane’s black box data recorders have been recovered and sent for analysis.

Russian Transport Minister Maxim Sokolov and Emergencies Minister Vladimir Puchkov have arrived in Cairo with a team of experts to help with an Egyptian-led investigation.

Two air accident investigators from France — Airbus’s home country — are also to travel to Egypt along with six experts from the aerospace giant to help with the probe. 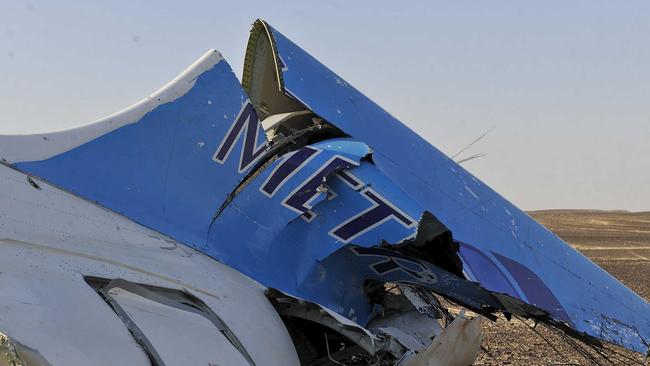 Crash scene … the remains of a Russian airliner which crashed is seen in central Sinai near El Arish city, north Egypt.Source:Reuters

Russia has declared Sunday a day of national mourning for the victims, who ranged in age from a 10-month-old girl to a 77-year-old woman. Flags will fly at half mast on official buildings in Russia on Sunday and entertainment television programs will be cancelled.

The incident is among the deadliest involving an Airbus aircraft in the past decade. No Australians were on board.

THE CAUSE REMAINS UNCLEAR

The Islamic State affiliate in Egypt said it was behind the crash of the flight run by the Kogalymavia airline, which operates under the name Metrojet, but did not give details and Cairo and Moscow both cast doubt on the claim.

Germany’s Lufthansa, Emirates and Air France all said they would halt flights over Sinai until the reasons behind the crash became clear. Horrific … Egyptian Prime Minister Sherif Ismail, on right, at the site of the wreckage.Source:AFP

News agency Ria Novosti quoted a source in Sharm el-Sheikh airport as saying that the crew of the A321 appealed to the airport’s technicians due to “engine start failures several times over the past week”.

The plane was built in 1997 and had four different owners in recent times, prompting questions about its maintenance record.

Authorities have rejected the claim made by the Islamic State terrorist group. Egyptian Prime Minister Sharif Ismail said experts had confirmed that a plane cannot be downed at the altitude the Airbus 321 was at, while Russian Transport Minister Maxim Sokolov said the claim “cannot be considered accurate”.

To reach a plane at that altitude “you would need hard-to-use missiles, so it seems unlikely”, added Jean-Paul Troadec, former director of France’s BEA aviation investigation agency.

“This requires trained people and equipment that IS does not have, to my knowledge.” Experts said a surface-to-air missile strike could have taken place if the aircraft had been descending, but a technical or human error were more likely. 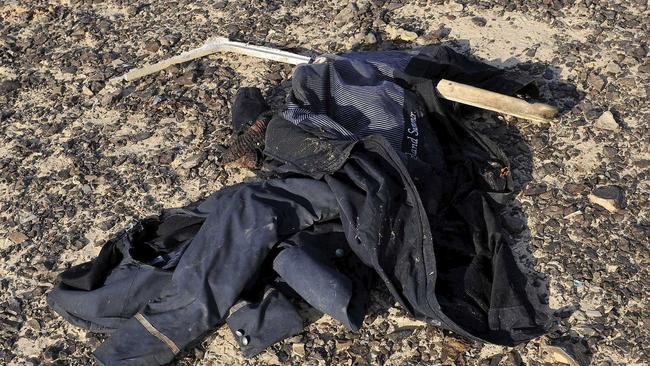 Tragedy … clothes are pictured on the ground at the crash site.Source:Reuters

An Egyptian air traffic control official said the pilot told him in their last exchange that he had radio trouble, but Civil Aviation Minister Mohamed Hossam Kamal rejected reports that the captain had asked to change course before the crash, saying communications had been “normal”.

“There was nothing abnormal … and the pilot didn’t ask to change the plane’s route,” he said. Tragic … ambulances carrying the bodies of crash victims arrive at the Zeinhom Morgue in Cairo.Source:AFP

The unverified statement, written in Arabic, says the flight crash was not a technical fault, as reported by security sources.

“The fighters of the Islamic State were able to down a Russian plane over Sinai province that was carrying over 220 Russian crusaders,” the statement read. “”They were all killed, thanks be to God.”

A TRAGIC LOSS OF LIFE

Earlier, there was a slim sign of hope as an officer told news agency Reuters rescue workers had heard “pained voices” from people inside a section of the aircraft workers were yet to gain access to.

A message posted to the Russian embassy’s Facebook page, from Cairo, confirmed the worst: “Unfortunately, all passengers of Kogalymavia flight 9268 Sharm el-Sheikh — Saint Petersburg have died. We issue condolences to family and friends.”

Kogalymavia released a statement offering condolences to the families of the victims and defending the pilot, Valery Nemov, who it said had more than 12,000 hours of flying experience, including 3,860 hours on an Airbus A321.

The Airbus A321 aircraft was operated by Russian airline Kogalymavia and was carrying 217 passengers and seven crew members.

The flight departed the Egyptian Red Sea town of Sharm al-Sheikh just before 6am local time.

The resort town is popular with Russian tourists. All of those on board the aircraft which was en route to St Petersburg are believed to be Russian.

The Russian emergency ministry published a list of names of the passengers. The 217 passengers included 138 women, 62 men and 17 children

The plane crashed in the desert region after losing contact with air traffic control shortly after take off. A senior aviation official said he plane was flying at an altitude of 30,000 feet when communication was lost.

A ministry statement said Egyptian military search and rescue teams found the wreckage of the passenger jet in the Hassana area south of the city of el-Arish, an area in northern Sinai where Egyptian security forces are fighting a burgeoning Islamic militant insurgency led by a local affiliate of the extremist Islamic State group.

“I am meeting my parents,” said 25-year-old Ella Smirnova, a young woman seemingly in shock.

“I spoke to them last on the phone when they were already on the plane, and then I heard the news.

“I will keep hoping until the end that they are alive, but perhaps I will never see them again.” “The head of state has given orders to send emergency ministry (teams) to Egypt immediately to work at the plane crash site,” a Kremlin statement said.

Putin also ordered the government to launch a special commission “due to the catastrophe of Kogalymavia company plane in Egypt”. An emergency ministry meeting shown on Russian television announced that teams of rescue workers along with the emergency minister.

Russia has a dismal air safety record from recent decades, and while larger carriers have started to upgrade their ageing fleets the crash will likely raise concerns about smaller airlines like Kogalymavia.

Metrojet said the aircraft underwent safety checks last year, and Russian aviation agency Rosaviatsia said there was “no reason to consider that the cause of the disaster was a technical problem or a crew error”. The last major commercial aircraft crash in Egypt was in 2004, when a Flash Airlines Boeing 737 plunged into the Red Sea after taking off from Sharm el-Sheikh.

The 148 people aboard that flight, most of whom were French, were killed.

Millions of tourists, many of them Russian, visit the resort town, one of Egypt’s major draws for tourists.

The resort, and others dotting the southern Sinai Red Sea coast, are heavily secured by the military and police as an Islamist militant insurgency rages in the north of the restive peninsula, which borders Israel and the Gaza strip.

Militants in the north who pledged allegiance to the Islamic State group have killed hundreds of soldiers and policemen since the army ousted Islamist president Mohamed Morsi in 2013.

US officials have offered their condolences to Russia and to all the families involved in the crash of a Russian passenger plane in Egypt.

US Secretary of State John Kerry told reporters: “We don’t know any details about it, but obviously the initial reports represent tremendous tragedy, loss, and we extend our condolences to the families and all those concerned.”