Islamic State is warning in a new video released online that more attacks are imminent on Western targets including in Washington, D.C. Rough Cut (no reporter narration)

THE bloodthirsty monsters of ­Islamic State have threatened revenge attacks in Australia.

In a vile new propaganda video, IS leaders are filmed gloating over the 129 deaths in Paris and swearing vengeance against all nations uniting to punish them.

They praise their “brothers” who have planned or launched terrorist attacks in Australia, and call for supporters worldwide to “fight the infidels”.

Referring to IS massacres and plots over the past year, he says: “You have seen what one Muslim has done to Canada and its infidel parliament, and what our brothers have done in France, Australia and Belgium. There are many more like them who have killed, ran over others and terrorised until we have seen the crusaders’ ­armies go on alert in Australia, Canada and Belgium.”

In other developments after the Friday night bloodbath in Paris:

SECURITY forces staged another 128 raids across France to arrest militants;

THE mastermind of the Paris outrage was identified, and;

CABINET ministers and prominent Muslims condemned Australia’s Grand Mufti for not denouncing IS. IS leaders filmed gloating over the Paris deaths.

“May Allah bless them all and rewarding with goodness on behalf of Islam,” al-Adnani says, ­according to a translation obtained by the Herald Sun.

“We promise, God willing, to continue to keep them in a situation of panic and horror, fear and loss of security, and what is coming is worse and more bitter, God willing.”

The video does not name teen terrorist Numan Haider — who stabbed two counter-terror police outside Endeavour Hills police station last year — but IS has previously claimed credit for his attack.

The video was released by a group based in northern Iraq called Wilayah Kirkuk and included several armed fighters ranting about attacking other countries that were bombing IS. “We say to the states that take part in the crusader campaign that, by God, you will have a day, God willing, like France’s,” one fighter said.

“By God, as we struck France in the centre of its abode in Paris, then we swear that we will strike America at its centre in Washington.”

The IS fighters are from Northern Iraq group.Source:Supplied 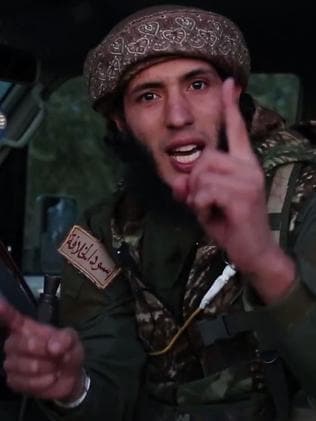 Scene from the propaganda video.Source:Supplied

It came as CIA director John Brennan warned the attacks in Paris were likely not a “one-off event” and he expected IS was plotting more terrorist attacks.

“Security and intelligence services right now are working feverishly to see what else they can do in terms of uncovering it,” Mr Brennan said.

“(The Paris attack) was not something done in a matter of days. This is something that was carefully and deliberately planned over the course of several months in terms of whether they had the operatives, the weapons, explosives, suicide belts.

“I would anticipate that this is not the only operation IS has in the pipeline.”

US Secretary of State John Kerry has described IS militants as “psychopathic monsters”.

Mr Kerry, in Paris for talks with President Hollande, said the US stood “shoulder to shoulder” with France.

Meanwhile, the first Syrian refugee family have arrived in Australia as part of a plan to resettle 12,000 people fleeing the crisis.

The family of five from the Syrian city of Homs were living in a refugee camp in Jordan for several years but had their application fast-tracked as the mother is seven months pregnant.

In a statement, the father thanked the Australian Government for giving his family “a chance at happiness”.