With Turkey and Russia trading insults, here’s why they’re probably not really willing to fight

One of the Russian pilots of a fighter jet shot down by Turkey has told state media there was no warning.

Flashpoint … Turkey has shot down a Russian military jet which it says violated its airspace near the Syrian border.

THE BLUSTER between Moscow and Ankara remains aggressive after the shooting down of a Russian combat jet earlier this week. If the spiral of threats reach flashpoint, here’s a few of the weapons you’ll suddenly be hearing a whole lot more about.

Russia is likely to find Turkey’s military a tough old bird. Decades of tensions between it and NATO partner Greece over ownership of waterways in the Aegean Sea regularly results in their forces staring each other down. But it’s also NATO’s second largest power, with some 640,000 personnel. Its air force is made up of some 230 fighters and a similar number of attack aircraft. At sea it has 16 frigates and 13 submarines. Its land army is supported by 3700 tanks.

Russia’s much maligned technology, however, is also proving to be something of a surprise.

Despite disparagement, its strategic bombers and navy have been pitching wave after wave of cruise missiles accurately against targets in Syria. The small force of modern and modernised combat jets which sparked this week’s tensions also have been far more active — and effective — than their Western Coalition counterparts.

Neither side would benefit from a sustained conflict. But both Russia’s President Vladimir Putin and Turkey’s President Recep Tayyip Erdoga are wearing their pride on their sleeves — jousting verbally to set their status as the toughest kid on the block.

It has created an environment where accidents can, and do, happen.

If either side ‘crosses the line’, here are some of the tools of war you may soon be hearing about. 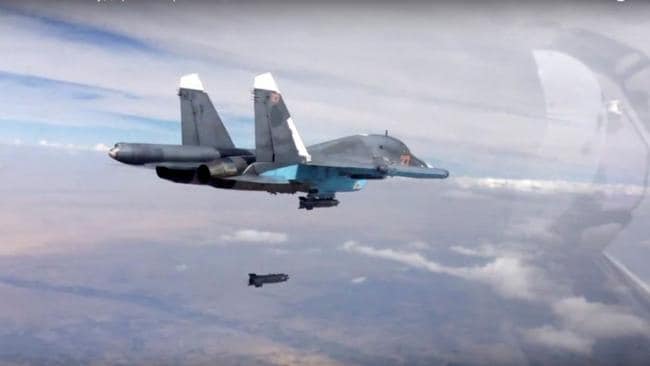 Air power … The Su-34, seen here dropping a bomb over Syria, is one of Russia’s most modern multi-role combat aircraft.Source:Supplied

Su-34 ‘Fullback’ & Su-30SM ‘Flanker’: President Putin has vowed no Russian air strike in Syria will now be conducted without an escort. The lumbering Su-24M ground attack aircraft — like the one shot down earlier this week — simply has no chance against modern fighters. So advanced, agile and heavily armed fighter aircraft will be taking up the role of body guards.

The Su-34 and Su-30 are closely related evolutions of the Cold War’s Su-27 family of interceptors. And if anything can turn the tables on a Turkish F-16, it’s these modern multi-role fighters. These aircraft display extraordinary manoeuvrability, long range and a vast array of missiles. Paired with modern sensors, these are the best aircraft Russia has flying and are likely to be capable of putting up a very strong fight. 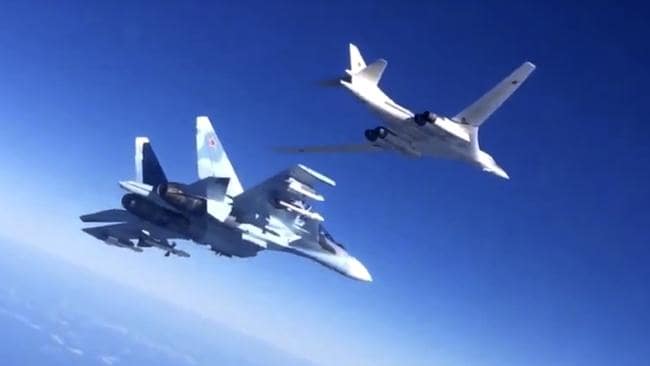 Long reach … A Russian air force Tu-160 bomber, right, is escorted by an Su-30SM fighter on a combat mission against a target in Syria.Source:AP

Tu-160 ‘Blackjack’ Bombers: These nuclear-capable strategic aircraft, adapted to drop anything from free-fall bombs to precision-guided missiles like their US B-1B counterparts — were unleashed after Russia confirmed its airliner had been brought down over Sinai by an Islamic State bomb.

The intercontinental range given to this swing-wing design was intended to allow them to linger threateningly with nuclear-tipped cruise missiles. They are now using that same long reach to drop masses of conventionally-armed weapons on Islamic State targets in Syria from their airfields in Russia itself.

Defensive umbrella … Russia’s S-400 air defence missile systems at the Hmeimim air base in the Syrian province of Latakia.Source:AFP

S-400 (SA-21 Growler): President Putin declared just hours after the loss of the strike aircraft that he will be deploying his most modern air-defence system to protect his forces.

The latest variant in the family of S-300 long-range ground-to-air interceptor missiles, the S-400 is cause for real concern. From the Latakia base on Syria’s Mediterranean coast it can reach out over almost all of Turkey and deep into Iraq itself. On parade … Russia’s frontline main battle tank, the T-90, during a Moscow parade.Source:AFP

T-90A Main Battle Tank: Russia has reportedly deployed a dozen of its best main-battle tanks among the ground forces it has committed to Latakia as part of its effort to prop-up the regime of embattled Syrian President Assad. It carries a 235mm cannon and a machinegun that can be used both against ground and air targets. It has a variety of armour types to help protect it from both explosive and armour-piercing ammunition, as well as jammers to make it difficult to target in the first place. All up, it is regarded as a most capable weapon more than capable of matching export models of the US M1A Abrams tanks. Slava-class P1164 Guided Missile Cruiser Moskva: Supported by a Krivak-class frigate and a Kashin-class destroyer, the cruiser Moskva forms the backbone of Russian naval forces in the Mediterranean.

President Putin has said this large warship will now be stationed close to the Syrian, Turkish border to add its advanced radars and anti-aircraft systems to the umbrella offered by the ground-based S-400 systems. In fact, Moskva carries 64 missiles which are pretty much the navalised cousin of the S-400 — offering similar speed, accuracy and range. 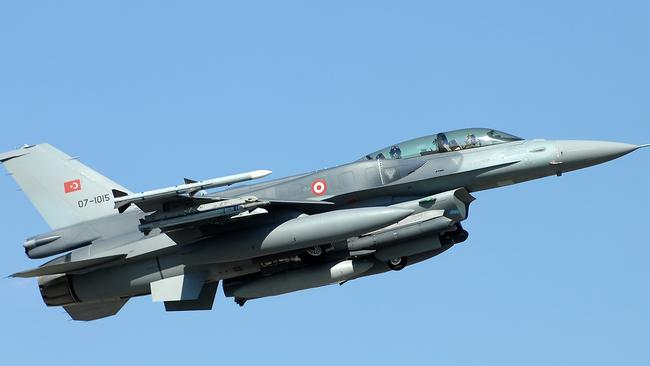 Fighting Falcon … Turkish-built versions of the famous F-16 are responsible for the shooting down of a Russian ground-attack jet on the border with Syria earlier this week.Source:Supplied

F-16C Fighting Falcon: Turkey didn’t just buy these fighter jets from the US. It built them itself under licence. And while the F-16 is itself something of a vintage design after first taking to the air in 1974, its sensors and missiles have continuously been upgraded to keep it on the front line — including gadgets such as helmet-mounted gunsights.

The single-engine interceptor has long since been modified to enable it to carry out ground-attack roles and remains the mainstay of many Western air forces, including the United States. Air cover … Patriot ground-to-air missiles are built to shoot down aircraft or other missiles.Source:News Corp Australia

Patriot Missile Defence System: You may have heard of this ground-launched anti-air missile during the first Gulf War. It was tasked with shooting down the Iraqi Scud missiles being lobbed towards Kuwait and Saudi Arabia. It’s a long-range missile system designed to be capable of hitting anything from cruise missiles to attack jets. Turkey doesn’t have them yet, but they’re very close to getting them from the United States. Escalating tensions may see pressure ramped up to deliver such a weapon early.

Heavy punch … The MGM-140 is a long-range missile which uses GPS to home-in on large targets.Source:Supplied

MGM-140 Long Range Guided Missile System: Turkey has about 70 US designed, armoured, tank-tracked mobile ground-to-ground missile launchers. The heavy missiles they carry can fly 165km at three times the speed of sound. Their GPS-guided warheads are accurate to well within 100m. If Russia and Turkey start trading more than insults, these missiles are likely to be among the first fired. Leopard 2 Main Battle Tank: A force of 350 German-built Leopard 2 battle tank spearheads Turkey’s 400 Leopard 1 and 1600 older M60 Patton tanks. The Leopard 2s were bought in 2005 from stocks made redundant by German military cutbacks. First introduced in the 1980s, the Leopard 2 is in the same league as the United States M1A Abrams. It carries big 120mm cannon which is fully stabilised to enhance its accuracy. Turkey’s first homegrown tank since World War II, the Altay MBT, is just now beginning to be built and is intended to help its military become self-sustaining. 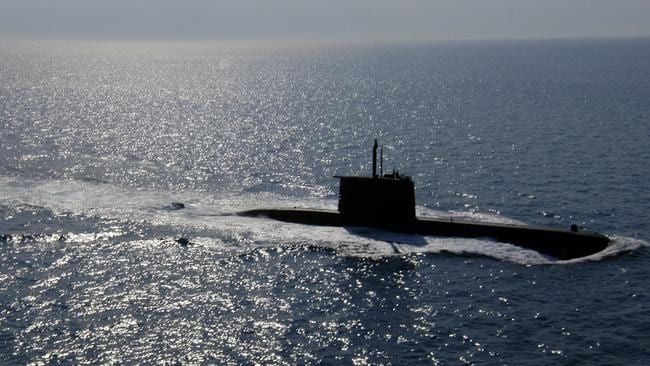 Silent threat . The Turkish submarine Preveze is one of several Type 209 Submarines it has deployed in the Mediterranean.Source:Supplied

Type 209 Submarine: These German-built submarines are designed to remain hidden in the Mediterranean’s shallow waters. Despite their relatively small size, they pack a nasty punch. They can carry a mix of 14 Tigerfish Mk 24 torpedoes and Harpoon tube-launched cruise missiles. It is highly likely that one or more of Turkey’s six Type 209’s are lurking in coastal waters, keeping a watchful eye on Russia’s Mediterranean fleet.

For more interesting, exciting and challenging News and Views from across the Globe visit my new News website http://www.powerglobal.us

My aim and purpose being to present an alternative to the Left Progressive Media on important issues including a stop to the UN enabled Islamic invasion of Western Democracies and awakening people to the Fraudulent Nature of the UN’s Climate Change agenda.

You can help by visiting and letting your friends know, no subscription, just click on the Headline or the link http://www.powerglobal.us

When you have read the article, the “Home” tab on the page header will take you to all the more recent articles I have published to date.