Carving up the capitalist ‘pigs’ at Davos

It’s hard to work out who deserves the Biggest Dolt Award at last week’s Davos conference. The Hollywood star who preached about the evils of Big Oil, the titans of industry who applauded him, or the Australian businessman who reported back from Davos that he is ashamed to be Australian. One thing is certain. It’s hard to take the so-called economic shindig in Switzerland seriously any more.

Over the past decade, CEOs have flown into the Alpine town, not to defend the virtues of free-market capitalism, but more to snatch autographs and grab selfies with the likes of Bono, Angelina Jolie, Sharon Stone, Bono (again), Richard Gere, Matt Damon and Bono (again). Last year, business bigwigs could join a meditation session with Goldie Hawn. This year, they ooed and aahed as Leonardo DiCaprio delivered the annual dose of pestilential vapour, this time slating “the corporate greed of the coal, oil and gas industries”.

As the grunting star of The Revenant, a new movie so long and boring with such little plot and so few words, it’s little wonder that DiCaprio embraced the chance to prance and prattle on stage at the World Economic Forum. One of Hollywood’s biggest earners derided those who are part of a “destructive system” denying the effects of climate change. “Enough is enough. You know better. The world knows better,” DiCaprio preached.

Enough is enough. The world ought to know better. Unlike rich Europeans, Australians or Americans, the poorest people in Asia and Africa can’t afford a house or a roof, let alone the cost of solar cells. After the Paris climate convention, China and India continue growth strategies that depend very much on fossil fuel. Coal delivered prosperity to the West. DiCaprio is welcome to attack an industry that now provides power and prosperity to billions of the poorest people on earth. But why would the titans of industry at the World Economic Forum invite him to do so, and worse, lap up economic illiteracy from the Wolf of Wall Street star.

In a gesture of reciprocity, surely we can look forward to Chris Rock, the host of next month’s Oscar ceremony, inviting on stage the CEO of Chevron to decry the excesses of Hollywood. Not likely. Yet like those 13th century Catholics who became known as the Flagellants for whipping themselves, modern- day CEOs routinely line up to get flogged or to flog themselves, not just over coal but about the virtues of capitalism. The sheer number of people lifted out of dire poverty — billions across the globe over the past 40 years — has been unprecedented in human history. Bob Geldof’s 1985 Band Aid concert didn’t achieve this. Bono’s anti-poverty schtick has achieved little. And forget those other celebrities who think their attacks on capitalism deserve a hearing because they can learn some story­lines or song lyrics.

As Tom Palmer wrote in The Morality of Capitalism, “Capitalism puts human creativity to the service of humanity by respecting and encouraging entrepreneurial innovation, that elusive factor that explains the difference between the way we now live and how generation after generation of our ancestors lived prior to the nineteenth century.” The combination of innovation and globalisation has delivered markets, jobs and income — in other words, progress in economic, medical, technological and ethical terms — to billions of people.

Given this reality, today’s corporate Flagellants have only themselves to blame for the routine attacks on their wealth, their companies and their achievements. When was the last time a corporate boss defended the morality of capitalism? Or made the case for more freedom in the workplace to encourage economic growth? Apart from a few standout exceptions — Daniel Grollo from Grocon, Alan Joyce at Qantas, Mike Kane at Boral — most CEOs run dead on the tough debates that go to the core of Australia’s prosperity.

Failing to make the arguments in favour of free markets points to a broader and deeper lack of belief in freedom itself. Instead, self-­indulgent CEOs sing from their corporate rooftops about same-sex marriage or indigenous recognition, signing up corporations they don’t own to social causes that don’t have the imprimatur of shareholders, customers or employees. Speaking of a logic deficit, last week Peter Holmes a Court epitomised the delusions of western business elites. Writing about his Davos experience in The Weekend Australian, Holmes a Court didn’t address the need for less red tape or more business-friendly policies as harsh economic headwinds strike. Instead, Holmes a Court lamented that Australians like him are no longer “cool” at Davos because of our immigration policies. He pointed to Europe’s “inclusive” mood towards asylum-seekers, expressed his em­bar­rassment about Australia’s policy and lamented that he “used to be cool.”

In fact, it’s still cool to be Australian. A survey conducted for Australia Day by the Institute of Public Affairs found that more than 90 per cent of Australians said they are proud to be Australian. Maybe the problem is with Holmes a Court. It’s certainly uncool to be so ill-informed about Europe’s very real problems arising from uncontrolled migration and Europe’s growing discontent on that score. 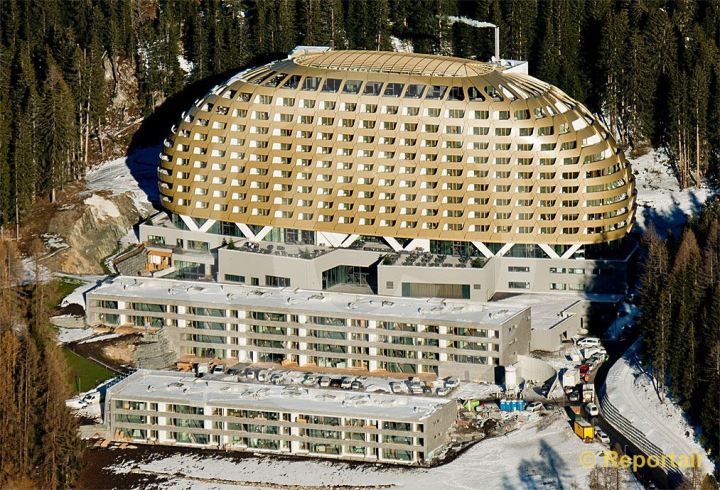 This kind of ignorant self-flagellation is made worse by business leaders who contract out corporate morality lessons to celebrity numbskulls. Singing the lyrics to Where the Streets Have No Name is no substitute for understanding basic economic history. Witness the celebrity hypocrisy of U2 frontman Bono. The Davos junkee was responsible for getting then Prime Minister Tony Blair and other leaders to agree to increased spending on third world aid. “We have to give our politicians permission to spend our money,” boomed Bono at the 2005 G8 Gleneagles summit, saying the “credibility” of the G8 was at stake.

Bono has his own credibility problem. If governments had a bit more of his money, that might help. Bono and U2 are famous for keeping their cash away from the taxman. For 20 years, they used Irish tax exemptions for artists and when those were finally capped in 2006, the band members promptly decamped with their millions to a Dutch tax shelter. As Bono’s biographer, Harry Browne wrote in his 2013 book, “celebrity philanthropy comes in many guises, but no single figure better encapsulates its delusions, pretensions and wrong-headedness than Bono — a fact that neither sunglasses nor leather pants can hide”. Last year, Bono finally admitted that “it’s commerce that’s going to take the majority of people out of extreme poverty. And, as an activist, I almost found that hard to say.”

Yet emotion still trumps facts on so many fronts. Each year, the media loves reporting on Fat Cat Monday and Fat Cat Tuesday, the day in early January when the average CEO has earned what an average worker will earn in a year. If you want to talk income inequality, why not Taylor Swift Monday or DiCaprio Tuesday or Bono Wednesday? Logic is absent in these debates. And business leaders have only themselves to blame. They are easy prey because they can’t or won’t defend free markets. That’s a shame because, as Milton Friedman pointed out: “A society that puts equality before freedom will get neither. A society that puts freedom before equality will get a high degree of both.”