Erdoğan denounces western policy on crisis, as Turkey – already home to 3 million refugees – is pressured to take in more from Aleppo region

Turkish President Recep Tayyip Erdoğan has threatened to send the millions of refugees in Turkey to EU member states, as Nato agreed to deploy ships to the Aegean Sea to ease the migrant crisis.

In a speech in Ankara on Thursday, Erdoğan stepped up his denunciations of western policy in the refugee crisis, confirming he had threatened EU leaders at a summit meeting in November that Turkey could say “goodbye” to the refugees. 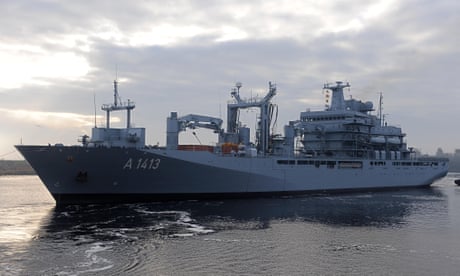 Military alliance sends three warships, backed by planes, to intercept migrants and refugees in admission from EU that it is failing to cope with flow of people
Read more

But in a separate move, Nato agreed to send a naval group “without delay” to the Aegean to crack down on the people smugglers who have helped hundreds of thousands of migrants cross to EU territory in the last year.

Alarm is growing in EU capitals that thousands of refugees are still crossing the Aegean daily from Turkey after over a million made the perilous journey last year.

But Turkey, already home to some 3 million refugees, is also under EU and UN pressure to take in tens of thousands of Syrian refugees fleeing regime advances in the Aleppo region.

“We do not have the word ‘idiot’ written on our foreheads. We will be patient but we will do what we have to. Don’t think that the planes and the buses are there for nothing,” Erdoğan said.

Greek website euro2day.gr had earlier this week reported that at the G20 summit in Antalya in November Erdoğan had angrily threatened to European commission president Jean-Claude Juncker that Turkey could send the refugees to Europe.

The website had quoted Erdoğan as telling Juncker: “We can open the doors to Greece and Bulgaria anytime and put the refugees on buses.”

“I am proud of what I said. We have defended the rights of Turkey and the refugees. And we told them [the Europeans]: ‘Sorry, we will open the doors and say goodbye to the migrants’,” Erdoğan said in his speech on Thursday.

He also lashed out at UN calls on Turkey to take in tens of thousands of Syrian refugees from Aleppo region massed on the border with Turkey, saying the United Nations has spent less than half a billion dollars in the crisis.

“Shame on you!” said Erdoğan, saying the UN should be telling states to take in refugees from Turkey.

Turkey is already hosting 2.5 million refugees from Syria’s civil war and hundreds of thousands from Iraq, and is increasingly bitter that it has been left to shoulder the burden.

The EU has agreed to give Turkey €3bn in financial aid for the refugees but the funds have yet to be handed to Turkey, two-and-a-half months after they were agreed.

“The €3bn is not in our budget, where has it gone?” asked Erdoğan. “It’s for refugees.”Turkey orders EU to hand over MORE cash or it will unleash MILLIONS of migrants on Europe

TURKEY issued an extraordinary blackmail note to Europe tonight by threatening to send MILLIONS more migrants into the continent unless the EU agrees to hand over extra cash.

By Oli Smith
The country’s president Recep Tayyip Erdogan pledged to put huge numbers of refugees on buses and planes unless European leaders give him more money to host people arriving from Syria.
In a bombshell rant he lashed out at both the EU and UN, who have criticised his country for not opening its border to more refugees
In recent days, world leaders have called on Turkey to take in Syrian refugees fleeing Islamic State (ISIS) and Russian air strikes on its southern border.
But Mr Erdogan retaliated in extraordinary fashion yesterday, threatening to “open the gates” and let millions of migrants into Europe.

He laid out the threat to his EU counterparts, including EU Commission President Jean-Claude Juncker, that the time could come when Turkey stop trying to prevent migrants from reaching Europe.
He said the Turkish government was being taken for “idiots” by Brussels and insisted he was “proud” of the threat during a high-level EU meeting, insisting he was “standing up” for his country.

He warned the EU: “I am sorry but we can open the doors, and tell the migrants ‘have a good journey.’
“Don’t think that the planes and the buses are there for nothing.
We will do the necessary.”

“I am sorry but we can open the doors, and tell the migrants ‘have a good’ journey'”

The threat follows what Mr Erdogan described as a “shameful” response to the Syrian migrant crisis.
Mr Erdogan said his government was currently preparing for an exodus of 600,000 people from Aleppo, in Syria, which has been encircled by forces loyal to brutal dictator Bashar al-Assad.
He raged: “The United Nations should give advice to other countries. And then we can send the refugees to these countries.”We will show patience up to a point, and then we’ll do what’s necessary.”

The combative leader also said the £2.3billion in aid promised to his government by European leaders had yet to be delivered nearly three months on.
The deal, backed by the British government, was struck late last year and included a promise that Turkey would get billions in aid in exchange for stopping the flow of migrants.The agreement also allowed Turkish citizens to start visiting EU member states without visa restrictions from later this year.Turkey has already been struggling to cope with more than 2.5 million refugees on its soil, spending more than £6 billion on hosting them since the Syrian civil war erupted in 2011.