Fury as Angela Merkel’s ‘attack dog’ threatens UK with trade war after Brexit and claims: ‘You can’t survive without us’ 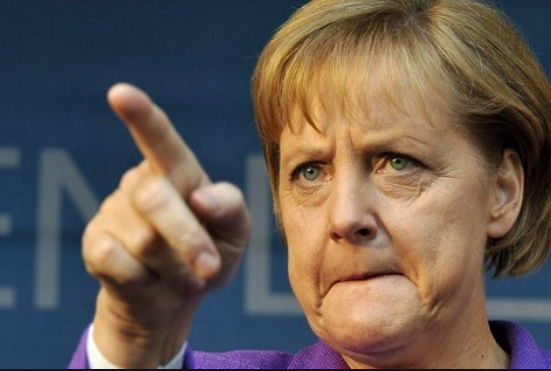 By Simon Walters Political Editor For The Mail On Sunday

A diplomatic row erupted between Britain and Germany last night after a senior ally of Angela Merkel was accused of threatening a trade war if Britain quits the EU.

Prominent German MP Gunther Krichbaum said the UK ‘cannot survive’ on its own and raised the spectre of crippling trade tariffs on British exports should we vote to leave the union.

Sir Bill said Britain had fought Germany in two world wars to keep its freedoms and was not going to surrender them to a German-run Brussels now.

In January 2013, he accused Mr Cameron of trying to ‘blackmail’ the EU; in May 2014 he mocked the ‘flip-flopping’ PM and derided his attempt to exempt Britain from the EU’s pledge for ‘ever closer union’ as a ‘desperate attempt to appease Ukip’; and in November 2014, he said Mr Cameron would get a ‘bloody nose’ if he curbed immigration without permission from Brussels.

But the timing of his latest comments, so close to the referendum, is bound to be seen as provocative.

Mr Krichbaum and Sir Bill had a sharp but courteous disagreement during a meeting in The Hague on Monday, but the gloves came off when they argued face-to-face afterwards. Mr Krichbaum, seen by some as Mrs Merkel’s anti-Cameron ‘attack dog’, claimed Britain’s economy would be devastated as a result of lost EU trade deals, saying: ‘You won’t be able to survive, trading conditions will not be in your favour.’

Sir Bill retorted: ‘Yes we can. We’ve been doing it for generations. We have a multi-billion-pound trading deficit with the EU: you run a multi-billion surplus. You need to sell us your cars and trucks. What do you take us for? Do you think we are incapable of running our own affairs?’

It was at this point that lawyer Mr Krichbaum, 51, a member of Mrs Merkel’s ruling Christian Democrat party retorted: ‘There is the question of tariffs.’

Indignant Sir Bill replied: ‘You’re not threatening me, are you?’

The Conservative MP told his German adversary: ‘There is history between our two countries. We have had to battle for our freedom over the last century. We should not and will not be governed by EU majority voting dominated by Germany.’

The row had started earlier at a formal meeting when Sir Bill declared: ‘Our people no longer trust the democratic structures of the EU. We are not going to be in the second tier of a two tier Europe effectively run by Germany.’

But he was slapped down by Mr Krichbaum, heard of the Bundestag’s EU affairs committee, who defended ‘EU solidarity’ and maintained all 28 nations worked together.

A defiant Sir Bill told The Mail on Sunday: ‘Mr Krichbaum’s reference to trade tariffs was a clear threat. It is basically Germany telling the British to get lost; it’s in their DNA to want to be on top.’

Sir Bill described their exchange as a ‘serious disagreement’ but denied it was a shouting match.

He said: ‘I did not make any threats – that is a lie. Bill Cash has his own agenda because he wants to leave the EU. I said that if Britain leaves the EU it will no longer have access to the single market and that will add costs to British industry and make exports less competitive. That is why much of British industry wants to stay in the EU.’

David Cameron had called a crunch Cabinet meeting to fire up Ministers for the negotiations in Brussels – but has been forced to cancel it as too many of his senior team were out of the country. One sardonic source said: ‘The most crucial Cabinet since the Election is scrapped due to skiing holidays.’

The Prime Minister flies to the European Parliament to discuss his reform plans. He will to try to win politicians over as the Parliament is likely to vote on whether Britain is allowed to apply an ‘emergency brake’ on benefits to EU migrants.

Today the talking will start in the Justus Lipsius building in Brussels. The draft agenda says the UK deal should be concluded over dinner.

Friday is meant to be set aside for talks on migration. But sources acknowledge that UK negotiations might stretch into a second day. They could even be a ‘three shirter’, running into Saturday. Although diplomatic ‘sherpas’ have started talks, four of Britain’s key demands remain in the air: the UK’s wish to halt ever-closer union, protection from the eurozone block, the brake on benefits and curbs on child benefits for migrants.

After the summit, the PM has pledged a Cabinet meeting, after which Ministers will be free to announce whether they back ‘In’ or ‘Out’. No date has been set, but Mr Cameron is under pressure to hold it on Saturday.

Mr Krichbaum said it was ‘not fair’ for Britain to blame Brussels for its problems and said he hoped Britain would stay in the EU – and he was convinced Mr Cameron felt the same, insisting the PM called the referendum ‘to calm down people in his party like Mr Cash’.

Mr Krichbaum’s warning came days after fellow German Martin Schulz, President of the European Parliament, said many Euro-MPs now wanted Britain out of the EU as Britain was ‘testing their patience’ with its ‘continuous demands’.

Mr Cameron met Mrs Merkel in Hamburg on Friday in his latest bid to secure more concessions on a new EU deal for Britain.

The final agreement will be hammered out at a summit on Thursday and Friday, and put to the UK Cabinet by next weekend. At least five Cabinet Ministers are expected to campaign against the Prime Minister and join the ‘Out’ campaign for the referendum, expected on June 23.

Anti-EU Tory grandee Sir Bill Cash is sitting in front me, slumped in an armchair in his Commons office, sobbing uncontrollably. It is a shock: 6ft 4in tall and ramrod straight, Cash is the quintessential buttoned-up English gent in his pin-striped suit.

But not today. He whispers through tears: ‘I’m proud of my dad, he was in the front line of the front line. The tanks… just came right at him.’

He is talking, painfully, about the moment that shaped his life, his destiny, perhaps Britain’s too.

Cash was four years old when his father, Captain Paul Cash, was killed in Normandy on July 13, 1944, at the age of 26. He won the Military Cross for his bravery and is still so revered in Fontaine-Etoupefour, where he fell, that they recently named a community centre after him.

Seventy one years ago, young Cash was at home with his mother Moyra when a postman arrived at the door with a telegram.

Just like the mother in the opening sequence of Stephen Spielberg’s D-Day film, Saving Private Ryan, Moyra Cash collapsed even before it was handed to her. When its contents were explained to Bill, the little boy told her: ‘Don’t worry mummy, I will look after you.’

I have known Cash since he became an MP in 1984. He and I have discussed D-Day before: my dad was there, but survived. But I have never seen him like this and awkwardly reach out a hand to this weeping giant as he recovers his composure.

‘She never got over it,’ he says, dabbing his eyes and sipping a glass of water.

In truth, I had not intended to interview Cash. His intellect and unflinching patriotic principles have earned him private audiences – and respect – from world leaders as diverse as Margaret Thatcher and Helmut Schmidt. But I confess that, when he made a beeline for me in the Commons, my first instinct was to give him the slip.

Bill Cash’s father Paul, who died in Normandy after the D-Day landings

Never mind speak for England, at times it can seem that Bill can bore for England on the subject of Brussels – and he wanted to bend my ear over David Cameron’s ‘worthless’ EU referendum deal and the way it was being spun as a historic triumph by No 10.

I listened politely. It was only when he mentioned the word ‘appeasement’ and an unusual picture in his office that my ears pricked up – and accepted his invitation to go and inspect it.

Capt Cash would immediately recognise the photograph that dominates his son’s dingy office: a sepia tinted portrait of Neville Chamberlain, the man who tried to appease Hitler.

Disconcertingly but deliberately, it stands on the window sill upside down. Permanently. It is a copy of a photo that appeared in the Illustrated London News when Chamberlain came back from his infamous talks with Hitler in Munich in 1938 waving his ‘peace in our time’ bit of paper.

Cash draws my attention to the caption, attributed to Chamberlain’s notorious Tory propagandist, Sir Joseph Ball. Said to be Britain’s first ever spin doctor, he makes Alastair Campbell look like a saint.

Ball was a pro-Nazi, pro-appeasement, anti-semitic, former spy who smeared Churchill with dirty tricks. Incredibly, the caption fawns over Hitler and Mussolini for helping Chamberlain ‘steer Britain towards the port of peace.’ It talks of Chamberlain’s ‘immensely enhanced prestige in Germany’ and how he had ‘abundantly fulfilled the hopes of Il Duce.’

YOU can imagine where my headline-grabbing thoughts were heading: ‘Tory PM lands at Heathrow after crisis talks with German dominated Europe as Conservative spin doctors claim he has saved Britain’s sovereignty.’ Chamberlain? Or Cameron?

‘I am NOT comparing Cameron to Chamberlain,’ he says emphatically.

Here is how he puts it: ‘Appeasement means to placate. By accepting the EU as it is now, we are placating them. And we know who runs the show.’ [He means Germany] ‘As Churchill said, we should be associated with Europe but not be absorbed by it.’

Infamous: Neville Chamberlain proclaiming ‘peace in our time’ in 1938

Cash was one of Margaret Thatcher’s closest confidants and she once asked him to spell out to her pro-EU Cabinet the threat of a German-run Europe.

‘Tell them what you feel,’ she urged him.

In front them all, Cash said: ‘You have it tougher than Churchill, Margaret: he only faced bombs and aircraft; you face bits of paper.’

Cash’s loyal wife Biddy gets cross when people call him a Little Englander: he has campaigned for destitute Indian women ‘rag pickers’ and against female genital mutilation, she points out, prompting Bob Geldof to joke that Catholic Cash is ‘second only to the Pope in the aid world’.

But even the BBC is coming round to his view. ‘I did an interview with John Humphrys and he said as I left, “We used to think you were all wrong on Europe, we’re not so certain now.”’

He is determined to prove her right in the referendum: ‘People like my dad died to defend our freedom and democracy.

‘I am damned if I am going to see it dumped in favour of the EU.’