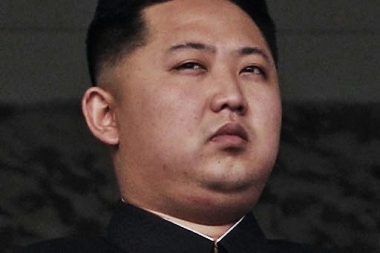 Donald Trump is proving he’s not a chump

In his first three months as leader of the free world, Donald Trump has shown up Barack Obama for being a weak foreign policy president.

Stepping into his role as Commander in Chief with ease, Trump is reasserting the United States’ authority on the international stage.

In doing so, he has reshaped Obama’s presidential legacy as a limp leader who disengaged from dealing in any meaningful way with the conflict in Syria and the development of nuclear weapons in North Korea and Iran.

Obama’s reluctance ­during his last four years in ­office to step into the global leadership role has had devastating ­consequences.

It paved the way for North Korea to go virtually unchallenged — with the exception of futile United Nations sanctions — as it developed nuclear and ballistic missile capabilities. The rogue nation may only be one or two years away from developing a long-range missile with an attached nuclear weapon that could reach Los Angeles.

In the hands of the unhinged Kim Jong-un, this is a truly terrifying ­reality.

Yet, knowing this was coming, Obama kicked the can down the road, leaving it to his presidential successor to deal with this explosive situation.

Now it is in Trump’s hands.

And the former Apprentice TV host has in the past week made it clear to the world he is prepared to deal with the fight.

Off the back of domestic and global applause for his decisive missile strikes on Syria, in retribution for an horrific sarin gas attack on women and children, Trump sent a fleet of ships up the Korean Peninsula in a warning to North Korea on its nuclear program.

It’s a welcome show of strength, fight and muscle from America.

But, unquestioningly, it’s also a high-risk manoeuvre, particularly taking into account the unpredictability of North Korea and its backers, Russia and China.

Foreign policy observers have been shocked at the swift change in Trump’s attitude towards Putin.

It’s an almost unreal situation: the characters — Trump, Putin, Kim and Xi Jinping — could feature all too easily in a Hollywood blockbuster.

Yet the threat is very real and very dangerous, with the prospect of it escalating into a full-blown ­conflict on the peninsula.

Over the coming days, we could see the North Koreans launch a test missile.

The Daily Telegraph exclusively revealed this week the United States had notified Australia and its allies that it is preparing to shoot this missile down should it be launched.

The situation is delicate, to say the least, and it will be one of Trump’s greatest tests as president.

Trump’s endgame — which he cannot back away from — is stopping North Korea develop nuclear and missile capabilities that threaten the US.

His last resort will be military action attacking North Korea’s nuclear infrastructure on the ground.

Short of military intervention, Trump’s first path is to pursue China and Russia’s help in truly squeezing North Korea with sanctions unless it disarms.

China hasn’t been serious about assisting the US to put pressure on North Korea, and could cut off North Korea’s energy supply of coal and oil.

North Korea is almost completely dependent on the Chinese for its energy supply.

If global pressure on North Korea fails, the situation that could unfold would be the worst we’ve seen since the Vietnam War, warns Australian Strategic Policy Institute executive director Peter Jennings.

He said military intervention to destroy North Korea’s nuclear infrastructure could be met with North Korea launching missiles against the city of Seoul.

“Sooner or later this will come to a reckoning, no matter how ugly it will be,” Jennings warned.

“There are thousands of artillery tubes which can fire ammunition against Seoul almost from the moment a US strike was happening on the missile fields.

“The North can also certainly hit Japan and the island of Guam, where there are US military bases.

“The possibility they could start firing missiles in the direction of Tokyo … that would be the worst military crisis we’ve seen since the Vietnam War.”

As much as Trump’s action is about Iran and North Korea’s development of nuclear weapons, it is also about a powerplay with China.

The timing of Trump’s Syria strike, while he was meeting the Chinese president Xi Jinping, is unlikely to be a coincidence.

He is sending a message to China: the United States is reasserting its authority and filling the leadership void Obama left.

RYANO CARE was never an option, what part of REPEAL AND REPLACE do they not understand?

IF BRITANNIA HAD BALLS: SHE WOULD WALK

5 thoughts on “TRUMP STEPS UP, DESPOTS ARE ON NOTICE, THE GAME HAS CHANGED”